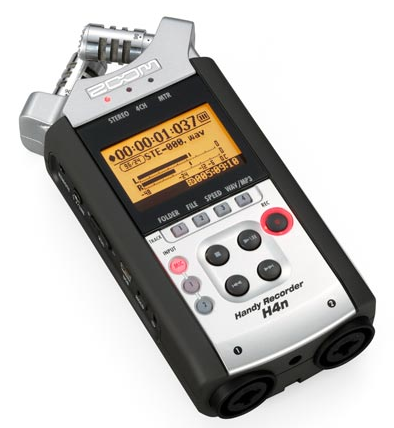 I picked up the Zoom H4n not too long ago for my concert and rehearsal recordings. While I’m really happy with the quality of the recordings there are some significant design flaws that prevent it from reaching its full potential. I have sent these issues to Zoom directly and they informed me that they have no plans to fix these problems, but will forward to the developers.

My overall workaround for the problems below is to:

**There’s No Hardware Based File Divider Function
**There’s no easy way to divide a recording into separate files while recording. The result is that you have to start and stop recording while rehearsing to get your songs onto separate files or you have to do more post-processing to extract the songs individually. It does support BWF markers, but only when you are recording WAV files, which is overkill for rehearsal recordings. I’ve heard that Reaper, Sound Forge and Adobe Audition support splitting (surprisingly the included software Cubase LE does not) on BWF markers but I haven’t tried because of the Max File Size limitation (below).

The easiest way to fix this is with a firmware update that allows users to override the default behavior of pressing the Record button while recording, which sets a BWF marker, to instead divide the file at that point. Even my cheap Sony Digital Voice Recorder has this function.

**It Pauses Recording When the Max File Size is Reached
**The H4n has a max file size of 2GB. If you hit that limit while recording it will pause recording, write the file to disk and then start recording again. The result is that you have a brief pause in the recording. I’m not how long the pause is, but it doesn’t matter because it shouldn’t pause at all. This is really bad if this happens in the middle of a song. This is my biggest disappointment with the device. It’s a basic feature that every other field recorder that I’ve used includes.

My workaround for this is to stop recording every 30 mins or so, let the file write to disk, hit record button to set levels and then start recording. It only takes about 3 minutes or so, but I shouldn’t have to do that.

This is a harder fix for them, but still a firmware fix.

This may require a hardware change, but should really only be a firmware fix as well.

**The Recommended 32GB SDHC Card Isn’t Available
**The Supported SD Card List has the Toshiba SD-C32GT4 32GB but that card doesn’t exist anymore. I asked Samson and Zoom and they have no recommendation for an alternative. The suggested going with something from SanDisk, Toshiba, Transcend and that the “list” isn’t definitive.

When you do get a card, make sure it is a Class 6 card. There are some reports online of Class 2 and Class 4 not working as well in the H4n. I decided on the Patriot SDHC 16GB Class 6 card and it seems to work fine.

Hopes this helps you in your research for finding the perfect field recorder.