The is a post for anyone who is trying to decide between the Kindle Touch and the Nook Simple Touch eInk eReaders. I bought them both with my own money and spent a lot of time reading with both of them. I couldn’t decide in the store because the demo apps that are preloaded on the devices don’t really give you a good feel for how the experience will be as you are reading. I knew the decision was going to be a big one because I will invest thousands of dollars in books over the years and the book formats aren’t compatible. It was worth spending a little more money now to try them both out at length and make an educated decision based on my experience.
I had never held an eReader before I picked up a Nook at the local B&N store. I didn’t realize it wasn’t backlit, meaning it is just like a normal book. You need a light to read it. (See my blog post for which light I recommend) That was pretty annoying, but then I remembered reading on my iPhone and getting eye fatigue from staring at the backlit screen for so long.

Having used an iPhone, Android and Windows Phone for years I was really appalled by the “touch” experience of the Nook. It was very slow to respond and there isn’t immediate feedback like there is on a modern touch interface. I liked the icon based navigation, but couldn’t see myself putting up with a UX that wasn’t responsive like my other devices. Then I checked out the Kindle Touch and soon realized that all eReaders have the same touch experience. I liked the navigation model of the Nook better so I was leaning towards that, but there were other features that were missing and I didn’t know if they’d be important to me or not.

At that point I decided that I wouldn’t buy an eReader. The plan was to try out an iPad and see if my eyes could deal with the backlit screen while reading for hours. It didn’t work. My eyes fatigued after reading on an iPad for 10 minutes. I, like most readers, read for hours at a time so that wasn’t going to work. Plus I read in bed on my side and with a backlit screen I need to wear glasses, which doesn’t work when I’m on my side with my head in my pillow. The iPad is also too big for me to hold while I’m on my side.

So, I returned the iPad and decided to try out both the Kindle Touch and the Nook Simple Touch to see which one I liked better. Actually, I had to decided which one I didn’t like the least, because I don’t really like either of them. It’s a choice between the lesser of two evils.

There is no perfect eReader out there, so be ready to make some tradeoffs. Here are my thoughts on the tradeoffs of each.

Very Important Features - These are make or break features for me. I put them in a category of their own because these were ultimately the features that lead to me choosing the Kindle over the Nook. 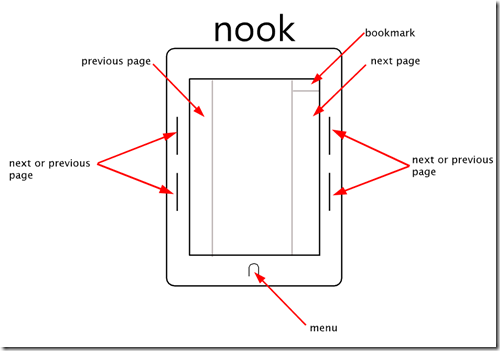 Important Features – These are important features, but not important enough for me to make a decision based on these features alone.

To sum my experience here is what I recommend:

Buy a Kindle if you…

Buy a Nook if you…