AT&T might be doubling billing you for data. I was getting close to my 2GB limit this month, so turned off my 3G and Cellular Data.

(yes, my SSID is Willie, affectionately named after Willie Nelson)

My billing cycle started today so when I checked my data usage I was very surprised to see 21.25MB used. 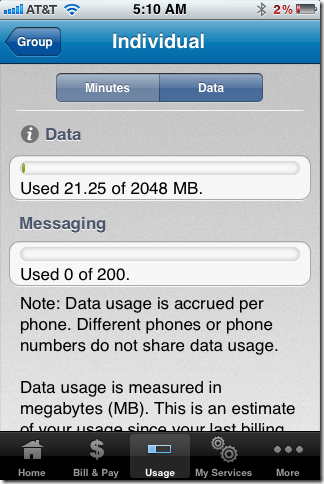 I called AT&T. They said that data usage doesn’t always post on the same day that it was used. The 21.25MB was used yesterday on 6/24/2012 (I had to turn it on for a minute to look up an address). That charge should have been billed to my previous billing cycle, but because of the delay in posting the usage to my account it appeared in my current cycle.

I consider this double billing, because I paid for 2GB worth of data for my last AND current cycle. That 21.25MB was already paid for last month, now I’m going to have to pay for it again this month. This is obviously a result of a bug in the AT&T billing software.

AT&T was very sorry that this happened and asked if a $10 credit would resolve the issue. I took the credit and I’m now happy, BUT this could happen to you as well. Imagine if it was a full gig of data that got delay posted, you’d run out early have have to pay the extra $10 for another gig.

I’m hoping they fix this bug, but here’s what I recommend you do every month to make sure you aren’t being double billed for data.

2. In the morning go to the myAT&T app or the AT&T website and check your data usage.

A good friend of mine pointed out that double billing is actually in their wireless customer agreement, they just call it “Delayed Billing”. You can see the full agreement here: AT&T Wireless Customer Agreement and I’ve copied the relevant section below.

_Delayed Billing: Billing of usage for calls, messages, data or other Services (such as usage when roaming on other carriers’ networks, including internationally) may occasionally be delayed. Such usage charges may appear in a later billing cycle, will be deducted from Anytime monthly minutes or other Services allotments for the month when the usage is actually billed, and may result in additional charges for that month. _

For anyone that doesn’t see how this is considered double billing:

The data usage doesn’t appear twice on your invoice, so it doesn’t first look like it is double billing, but you are being doubled billed for something, whether it is pre-paid or not, when you pay for it twice. Even if it is in the form of a prepayment.

It’s not a big deal in this specific case, because it was only 21.25MB that got billed twice. But imagine if it was 1GB. I would be starting my next billing cycle with only 1GB left.

I recommend keeping an eye on your data usage using the AT&T website or the myAT&T app just to make sure you don’t have any surprises. If you are like me and you see double billing occurring then you’ll give them a call.