Over the years I have found many bugs in Microsoft products. I want to help Microsoft have the best products out there, so I take the time to file bugs or talk with the product teams about the issues. They are always very cool about it by connecting me with the dev who wrote the feature to help me diagnose the issue and sometimes spending hours with me.

The most recent example is when I found a bug in the Visual Studio Extension manager when trying to update NuGet. I pinged Howard Dierking, not that he has anything to do with the Extension Manager per se, but I know he runs NuGet and would probably be interested in solving the issue. Within the next couple of days I heard from Jitendra Kumar, a dev on the Extension Manager. He couldn’t repro the issue locally, so he wanted me to share my desktop so he could see the issue. He took control of my machine, loaded the symbols for the Extension Manager, stepped through the code and found the offending line of code. It was pretty awesome to him at work. Here’s a screenshot I took while he was debugging the issue. (Click it to see a larger version) 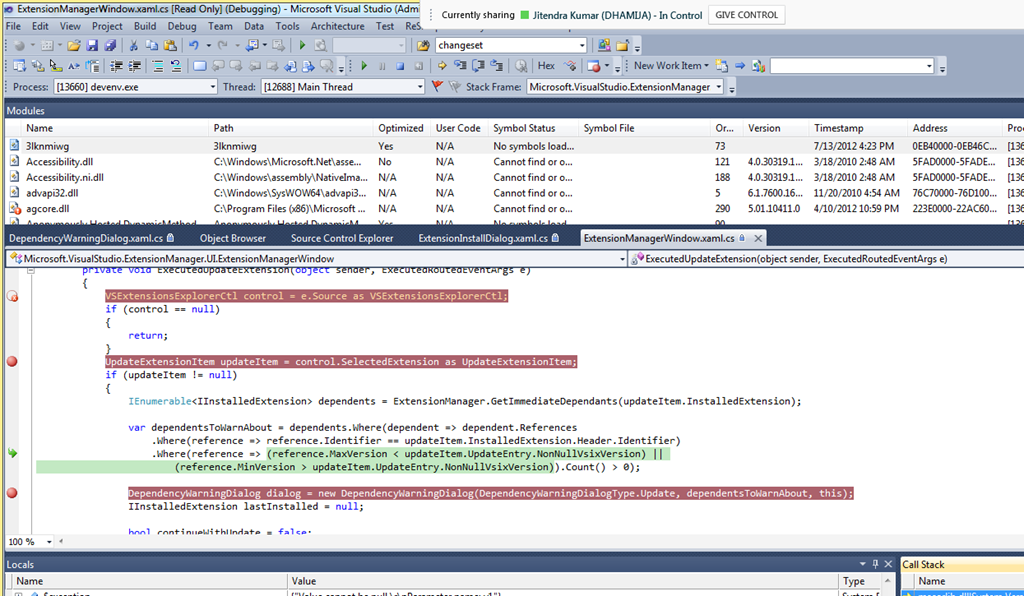 That is just one small example. I’ve worked with so many product teams over the years including TFS, Office, BizTalk, SQL, Visual Studio, you name it and I bet I have been helped by them.

This is obviously an amazing perk of working at Microsoft. Especially as a dev. Imagine the thing that annoys you the most about a product or a bug that is blocking you from your work. Yes, you can get support if you work for another company. But man, being a Microsoftie and being able to IM the dev who coded that feature. That is awesome.