I spent about two hours the other day trying to find a good jQuery ComboBox, so I thought I’d do a quick post to see if I can help you narrow down your choices. I ultimately decided to go with the Telerik Kendo UI ComboBox, because it supports the features I needed out of the box, is free, has an MVC helper and a NuGet package. 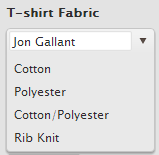 I found Hyjack Select and Chosen, but they aren’t true ComboBoxes. A ComboBox must allow you to select an item from a dropdown AND enter in a new item, both Hyjack and Chosen do not allow you to do that without customization. I also found a bunch more on GitHub by just searching for ‘jquery combobox’. I poked around at a few of them, but I found myself going down too many paths and wasting a lot of time.

I then stumbled upon the new Kendo UI controls by Telerik and discovered that they have a jQuery ComboBox with an MVC Html Helper, a NuGet package and best of all it is open source (GPL v3). I’ve been using Telerik controls for many years, so I’m used to the high-quality products they dev. Most of the other options I looked at were dev’d by one guy and didn’t have any kind of support. The free version Kendo UI doesn’t come with support, but they do have forums that are pretty active.

Save yourself some time and just go with the Kendo UI ComboBox. So far it is working out very well for me.