I am an avid Google Reader user. I use it to scan over 400 tech blogs and often share to Facebook, Twitter, LinkedIn and email. It’s easy to miss stuff on Facebook and there’s too much noise on Twitter. Since Google Reader is going to be retired on July 1st, I set out to find a good cloud based alternative for web and mobile.

Since I subscribe to 400+ blogs I need a “list” interface that allows me to quickly scan headlines. I’m not interested in pictures or elaborate layouts. Google Reader was perfect for my scenario, so I’m going to try to find something as close to their layout as possible.

I often share articles that I think are interesting to Facebook, Twitter and to my team via email. I need to be able to do that from the reader interface. This is something that Google Reader is lacking in as well…you can only share to Google Plus or Email. My new service will need to be able to share to Facebook, Twitter, Google, LinkedIn and Email.

It has to to be fast and it has to work. As you’ll see later, many of the alternatives aren’t even functional. I’m sure it is because of the current onslaught of traffic, but it tells you a lot when a site can perform during these peak “Google Reader Alternative” times.

I often see articles that I are interesting but will take more time to read than a scan. In Google Reader I star them and then go back to read them when I have a few minutes.

It must work on Mac, Windows & iPhone.

I think the best thing for Google to do is to open source Google Reader and let another company that can scale take it over. That likely won’t happen, so let’s try to find a replacement.

I grepped the entire interwebs looking for a good alternative and compared them against my requirements. All the details of my experience are below. To sum up my investigation…there isn’t a perfect replacement, but the ones that come close are:

Netvibes – I’m going to switch to Netvibes. It was the only reader that met all of my requirements, performed well during the “Google Reader alternatives” peak times, but they really need to do something about that font…or let me change it.

Good Noows - Met all my requirements as well, but it was extremely slow. I also really hate the popup div. I’d reconsider if they fix those issues.

The following two options are included in my top 4 because they look like great apps, they just need to perform better and they need to resolve the errors. I will come back later and try them out again…or not. I’m sure I’ll get settled with Netvibes and stay there.

Feedly – Looks like a great app, but too many perf issues and errors to get a good feel for it.

Newsblur – Same as Feedly. I’ll come back if they improve perf and get it functional. 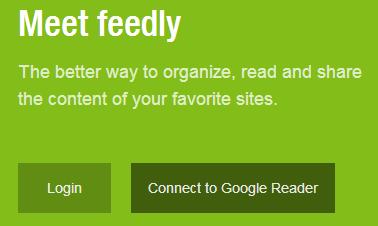 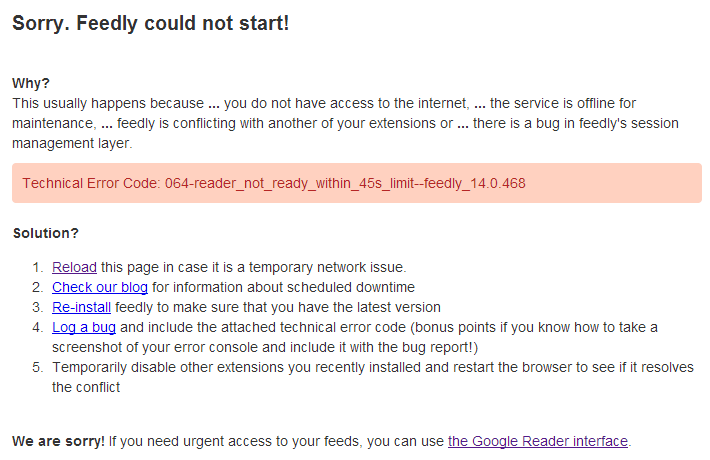 I went back to Feedly.com and it hanged on “Refreshing page…” 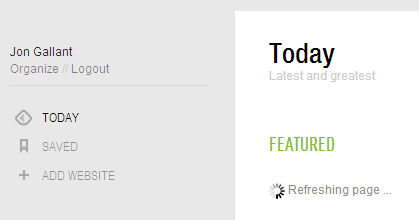 This looks like a good feature…being able to see popular articles shared by my friends and the people I follow. 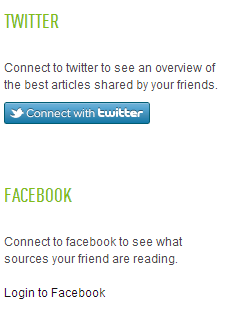 When I click on a tag I expect there to be a way to view all feed items that are read, but it doesn’t look like there is a way to do that. 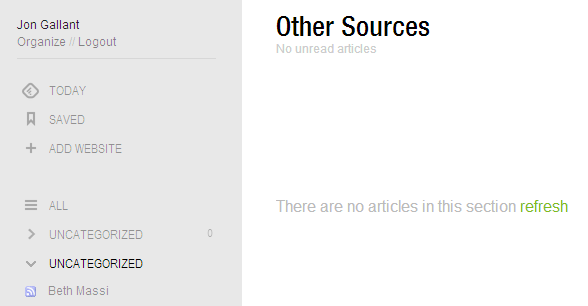 I think I’m going to like Feedly.com, but it doesn’t work right now. I’ll have to come back later to fully try it.

I like how the content is framed into the page, but I couldn’t create an account or import from Google Reader because of this error. I’m sure it is due to load. 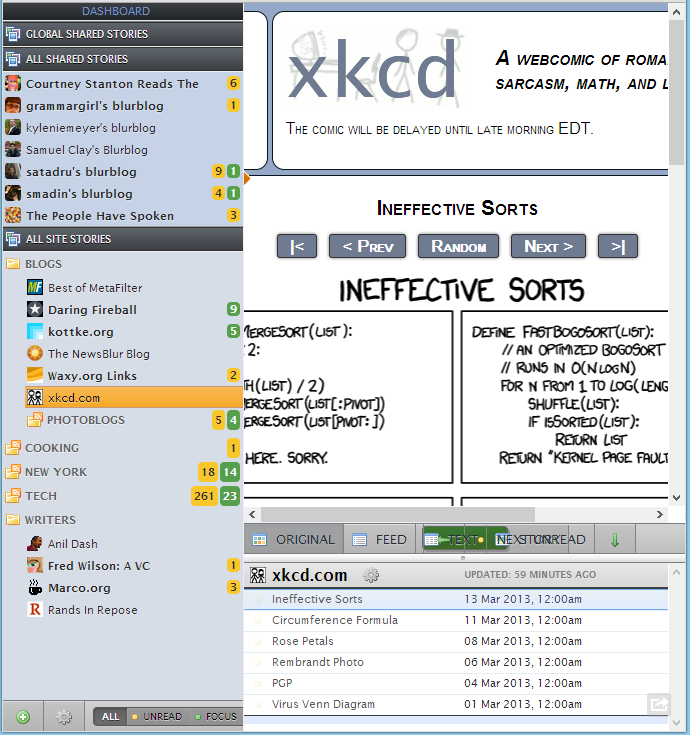 When trying to refresh a feed…

It’s really hard to evaluate Newsblur because it isn’t functioning.

The first thing I notice is that they have a premium account for $499/month. I’m skeptical that there will be a big upsell, but I see they have a free account. The premium is for “brand monitoring” and some other stuff that I don’t really care about at this point.

First thing I notice is that they do have a list layout toggle in the header:

Then AWK! the font they chose is awful…no one uses Garamond, Georgia as their main font…not sure if I can look at that all day long.

That redirects me to the list dashboard that looks a lot like Google Reader…but man that FONT is going to kill me.

They do have a “Read Later” feature, which meets my Flag/Star requirement. I like how it is integrated into the app and doesn’t require me to use Pocket or Instapaper like Good Noows does. 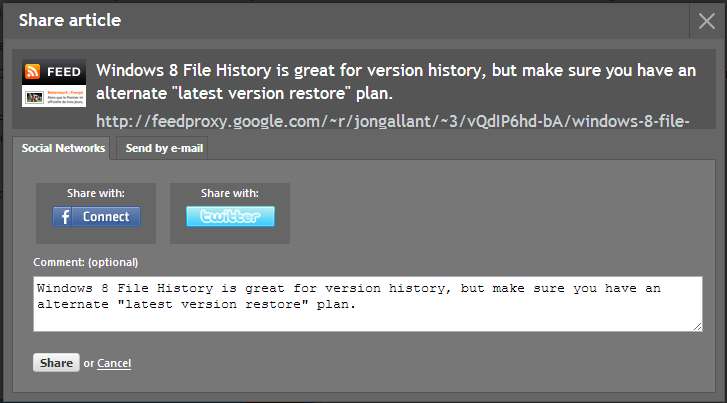 So far, Netvibes is the best option because it meets all my requirements, I just wish there was a way to change the font. They don’t have LinkedIn/GooglePlus integration, but that isn’t a must have for me.

I don’t see a way to view as list, couldn’t import from Google Reader moving on to next one…

Mac only. I need Windows too.

They have Google Reader import… 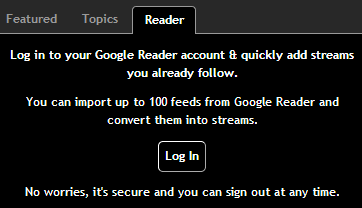 I tried, but I got this spinner for about 30 mins

I go back home, click Add Stream again then I see this under Reader… 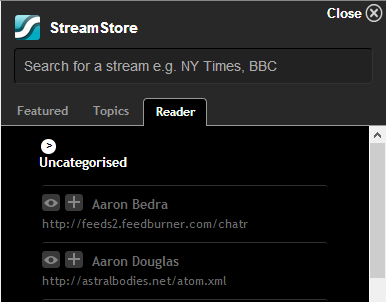 No way to view as list…moving on…

I don’t see a web version…moving on…

I click on Newsstand and I see OPML import… 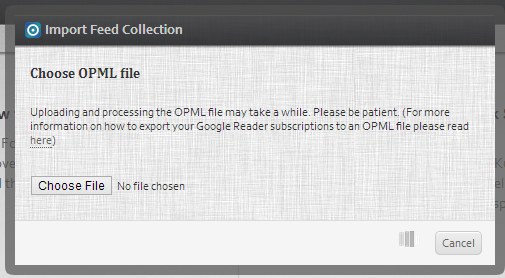 I go back to Newsstand, click on Imported sources and I see “some” of the blogs, but not all. I might have to reimport them all manually. 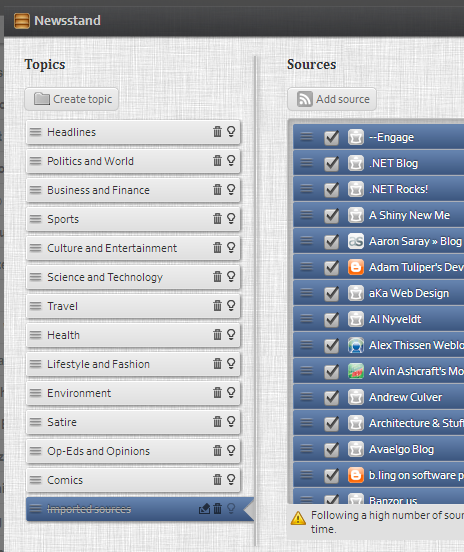 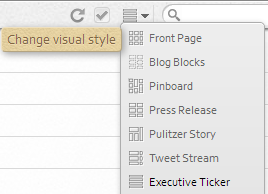 In list view the titles disappear if the title is longer than the visible space:

I REALLY don’t like how every story pops up in a new overlay div. The UI is awful and it is very slow. 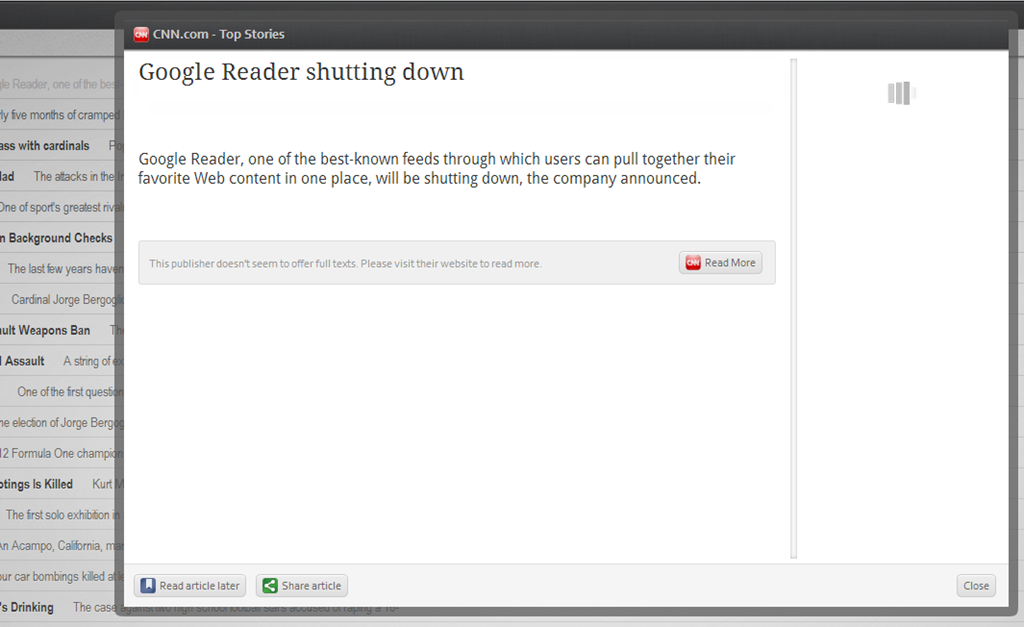 Looks great, but they don’t have a web version.

No Google Reader Import. Perf is bad. Seems like a really old site. Got this when importing one site:

This site looks very old school. I poked around a bit and didn’t I didn’t like the usability of it and didn’t see an OPML import feature, so I moved on… 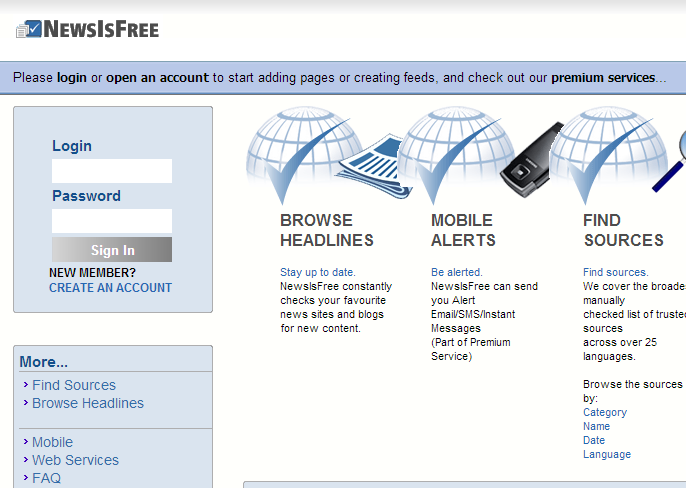 They have OPML import:

I waited a few minutes, went to the homepage and didn’t see any of my feeds. Although slick it doesn’t look like it meets any of my other requirements…moving on…

Desktop only and it uses Adobe AIR, but I thought I’d give it a try.

They have a Google Reader import feature: 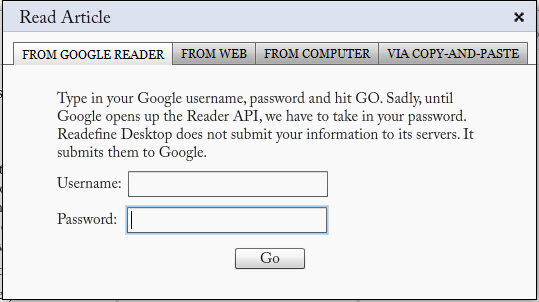 The reader interface looks nice, but it doesn’t meet any of my other requirements. It also appears to be backed by Google Reader, so it might not be available after Google Reader is dead.

Will be shutdown when Google Reader dies

Looks promising, but not available yet.

Looks like you have to install it on your own server. Moving on…

You can import Google Reader. Go to My Rolio –> Import

I initiated the import and it’s been spinning for minutes… 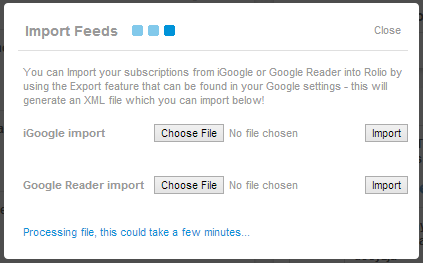 From what I can tell there doesn’t seem to be a way to view all unread items in one list. You can click on the feeds on the right and then they pop to the top. Not going to be manageable with my 400+ feeds. 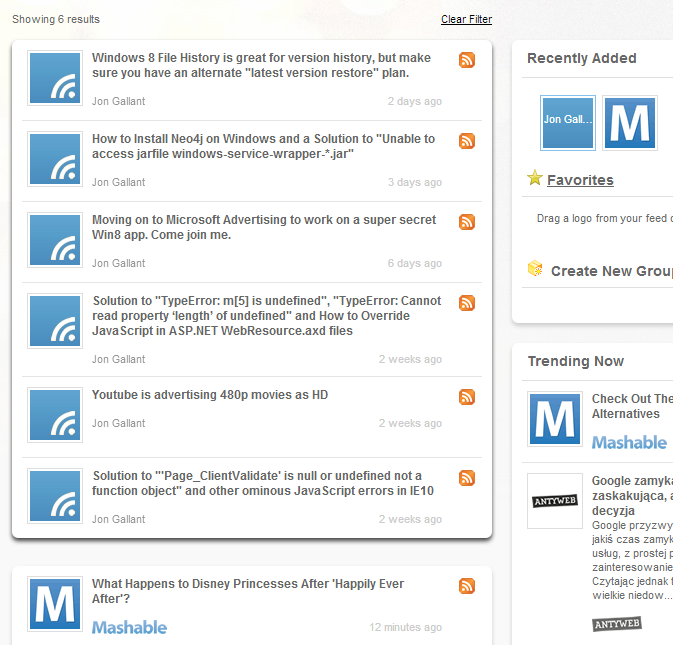 You can share to social networks, but not email.