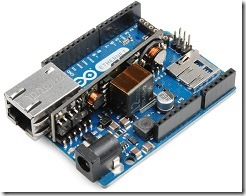 As I am building out my “maker experience” product “beakn” I’m constantly thinking about ways to improve it with the goal of getting it to be completely wireless. I started with it being USB connected (beakn v0.1), then Ethernet (beak v0.2) and now I’m looking into wireless communication. When I was looking at Ethernet I was researching Arduino ethernet shields and came across the Arduino Ethernet Shield with Power-over-Ethernet (PoE) Module. I didn’t research the requirements much, I just thought it would be great to have an Ethernet option and only run one cable and get both Ethernet and power – so I ordered it.

What I didn’t realize is that power isn’t provided over ethernet by default. When I plugged the ethernet cable into the shield I thought it would power up, but it didn’t. I spent a lot of time researching settings or configuration for it, but found nothing. I bypassed my router and went directly to the source to see if it was an issue with my router. Still no luck. I then (using this guide)built a cable that I thought could be used to get power out of the ethernet cable. 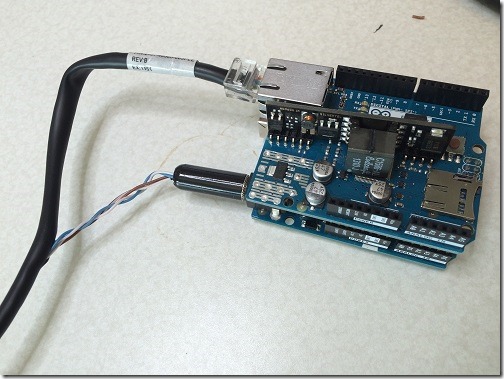 It then came to me that power might not be provided by default. So I searched for “router PoE” and discovered that there are indeed PoE enabled routers and I didn’t have one.

I also at the same time pinged a co-worker, who is an EE – Hardware guru and he had this to say:

PoE means that every single device on the chain from PSE (power sourcing equipment) to PD (powered device) must be PoE capabled\aware.

In order to get PoE working the PD presents a certain signature on the line which PSE picks up on and initiates a short preamble (detection, classification, mark, class, startup) with PD.

Thus PoE is usually point to point – as in, a power injector injects power just after the final switch.

In short that means that the Arduino Ethernet with PoE shield isn’t just going to work without a PoE enabled chain. Yes, you could get a PoE router or midspan device, but this is where I drew the line for my project. I likely won’t have an Ethernet version (remember my goal of being completely wireless) and I definitely don’t want to require my users to have to purchase a PoE router or midspan device.

Going down this PoE path was a good learning experience, but I’m not going to pursue it for beakn. I’m going to keep going down the wireless / battery powered path and leave PoE for a future project.

Hope this saves you some time while researching PoE options.