Around this time last year I did a deep dive into 8 different 3D modeling software options in my “3D Modeling” blog series. I landed on Fusion 360 because it is professional grade, has great support and it is free until you make a profit from it. While I still consider myself a F360 novice, I like to share what I’ve learned to help others get a jump start.

I’m always looking for cool things to design and render with Fusion and this image jumped out at me in my Twitter feed a couple of weeks ago. 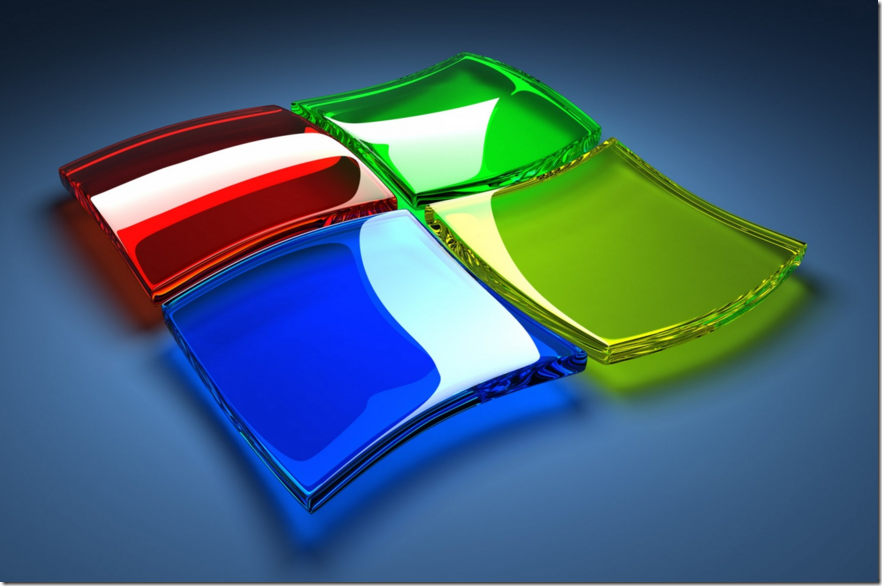 I immediately thought that would be something cool to render with Fusion. If you haven’t seen it yet, Fusion has an amazing rendering engine, especially for glass, metal and wood.

It took me a number of iterations and a bunch of back and forth with Taylor Stein (from Fusion 360 team), but I was finally able to create this with Fusion: 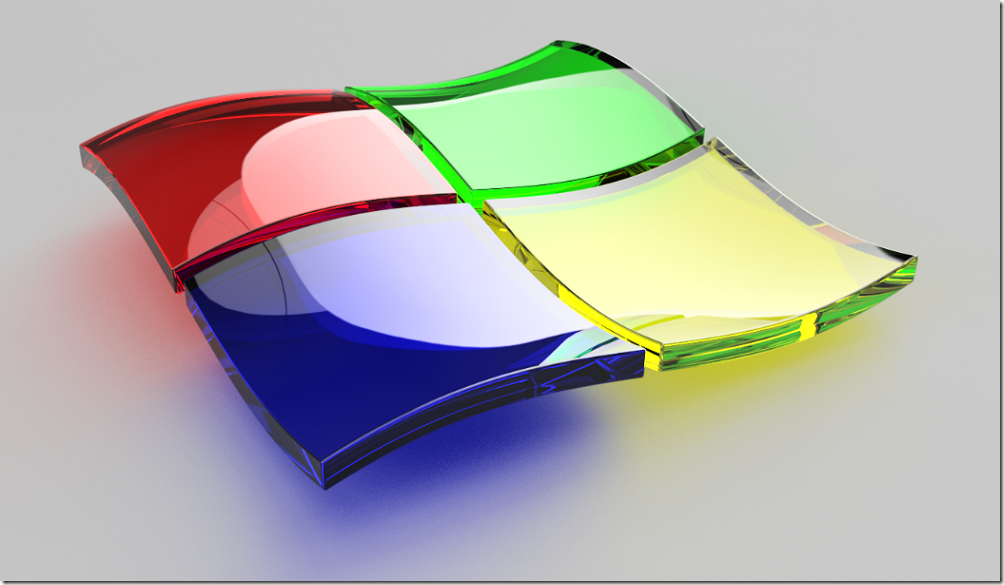 It’s not an exact match to the original - but it’s definitely close enough for me.

Here’s a video that bring you through this build step-by-step:

Here are the tools I used to create it:

The first step is to build a single sketch that contains the wave. I started with the red/blue side of the logo as my main face. You can see it bends up first and then bends down.

I’ve been learning the subtractive 3D modeling technique which basically says you start with primitives like rectangles and squares and then carve out the shapes you want. You can see above that I first created a rectangle of construction lines and then drew the wave using the anchors. The rectangle acts as a guide for the lines that make up the wave.

Here are the construction lines. It’s a rectangle that 40mm x 4mm on the perimeter and then two lines through the middle, one at 10mm and the other at 30mm. Those lines allow the wave to have consistent touch points throughout.

Here’s the first spline based on those construction lines

I then created 4 more construction lines for the height of the side. It’s a little hard to tell from this screenshot, but look at the 4.00 lines that are selected. Make the 3 lines in the middle “construction lines” so they don’t interfere with the overall sketch of the wave. If you keep them as normal lines then they will subdivide the sketch. As construction lines, they are just there to help you form your shape.

Draw another spline along those new lines.

We now have our first side.

We’ll copy that sketch to a new plane and then use the Sweep command to create the solid shape.

Click Stop Sketch and then Start a new Sketch by selecting one of the sketch tools. (If it doesn’t immediately create a new sketch for you, then toggle back and forth between stop sketch, select and the drawing tool until you get this: 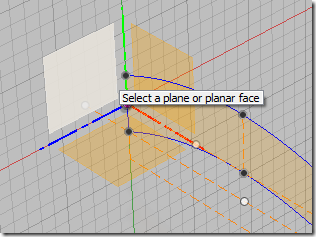 Select the plane that is perpendicular to your first sketch.

Drag and hold your mouse to select the entire first sketch 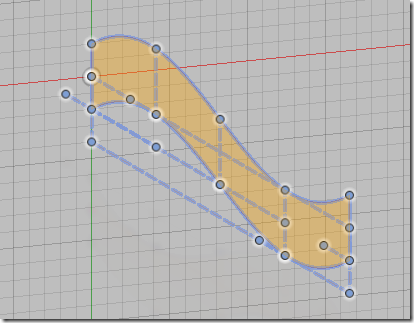 Then hit Ctrl+C to copy it.

Deselect the sketch by clicking anywhere on the empty grid.

Then hit Ctrl+V to paste it into your new sketch.

You will then see this: (If you don’t, keep trying by making sure nothing is selected when you hit Ctrl+V) 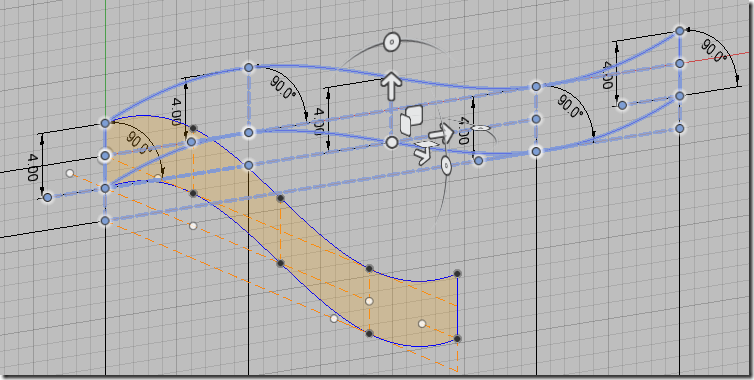 Now we need to execute the Sweep command of the first sketch along the path of the one we just copied.

Under the Create menu, select Sweep 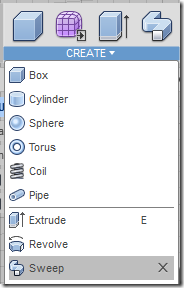 That will bring up the Sweep dialog. Select the first sketch as the Profile and the bottom line of the second sketch as the Path. Also, select “Parallel” from Orientation (that will draw the shape lines straight up and down versus slanted with the other options. 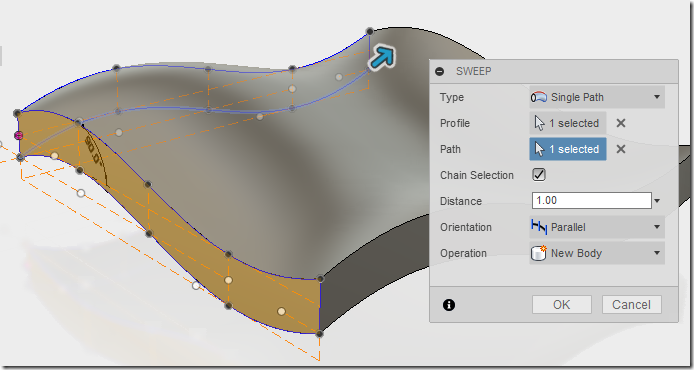 That is your overall main shape. Now we need to cut it in 4 pieces using the Split Body command. 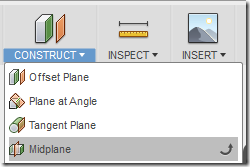 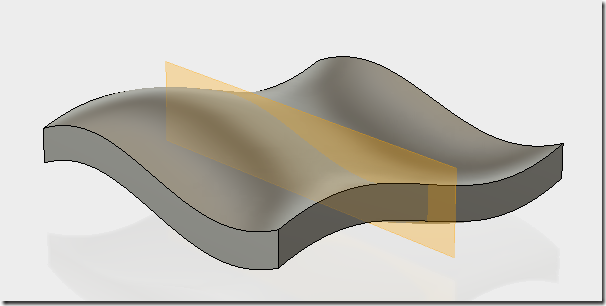 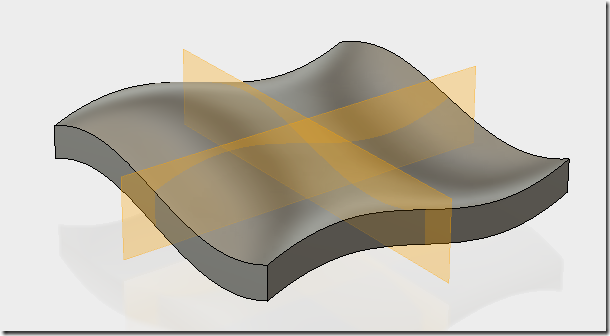 Now choose “Split Body” under the Modify menu. Select the body and then one of the Midplanes as the Splitting tool. 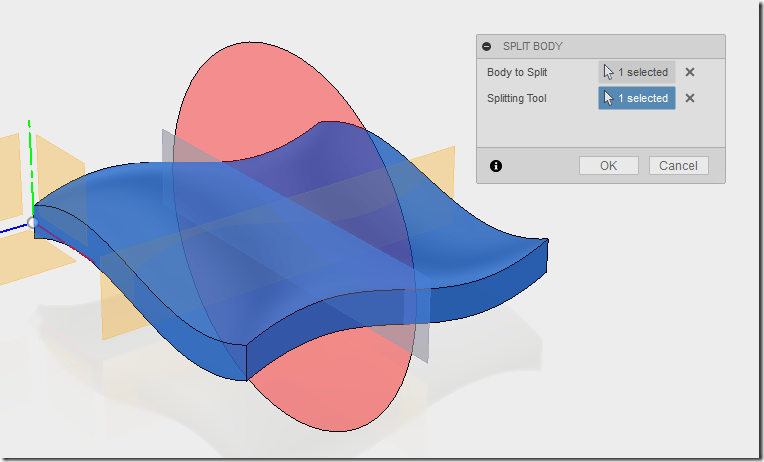 Do the same thing for the other plane. 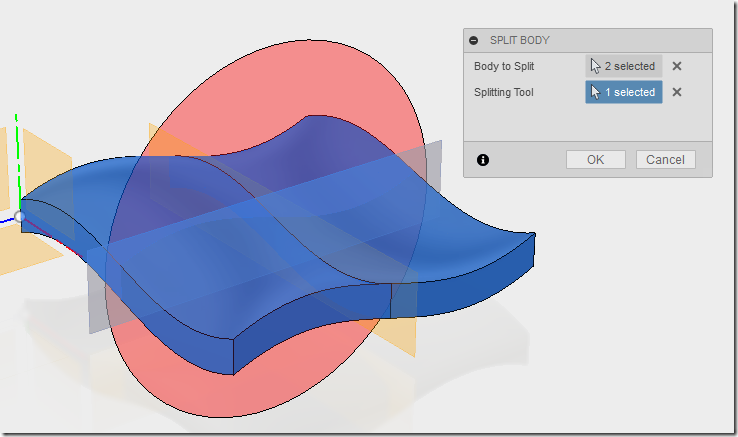 You then have your shape cut in 4 pieces 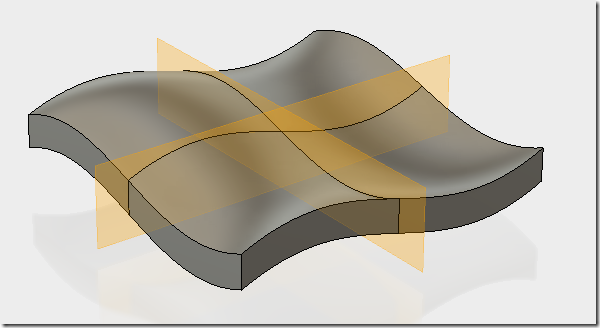 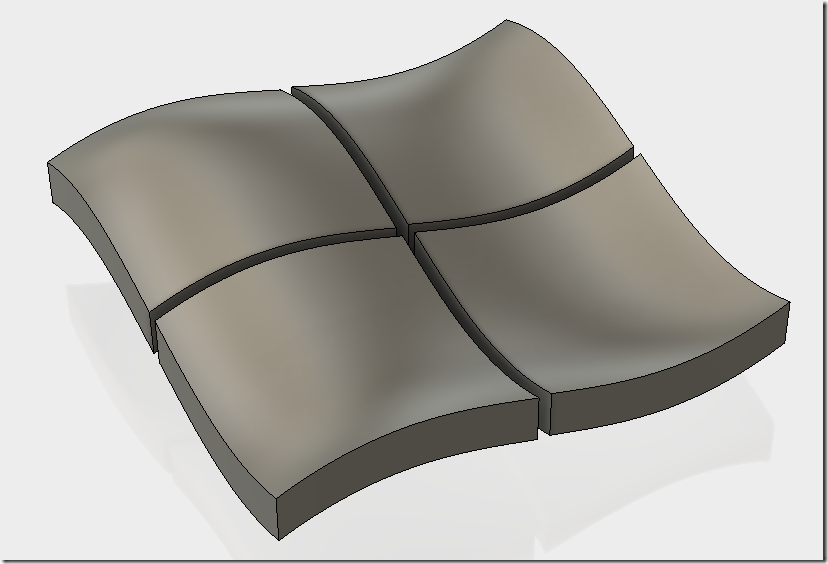 Then I applied a Fillet of .2 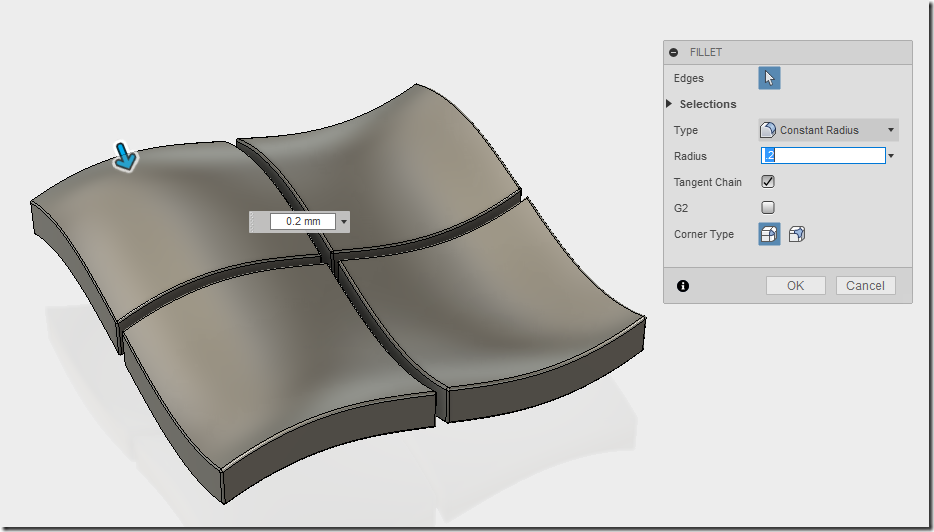 So, here’s the final shape before we start rendering it as glass. 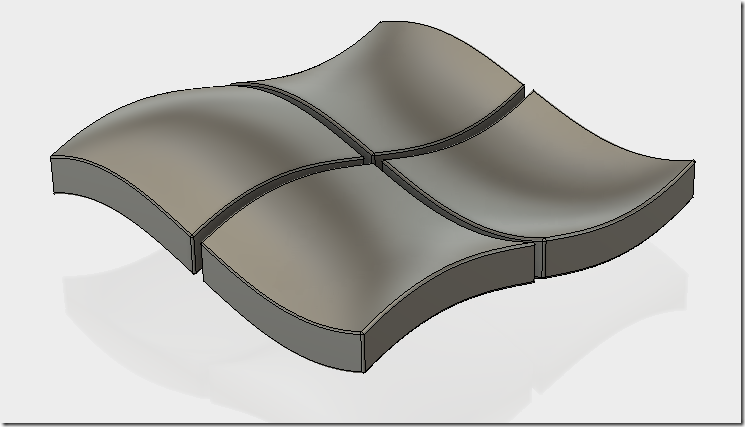 Now let’s render it. Choose Render under the leftmost menu 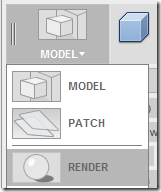 Select the Appearance button that looks like a color wheel.

That will bring up the Appearance dialog 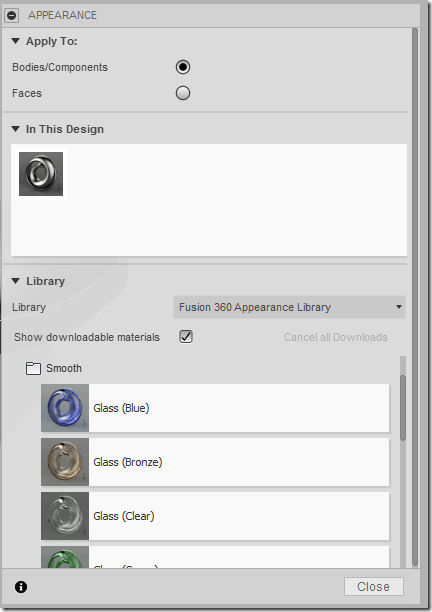 Drag the red, green, blue to the corresponding body parts 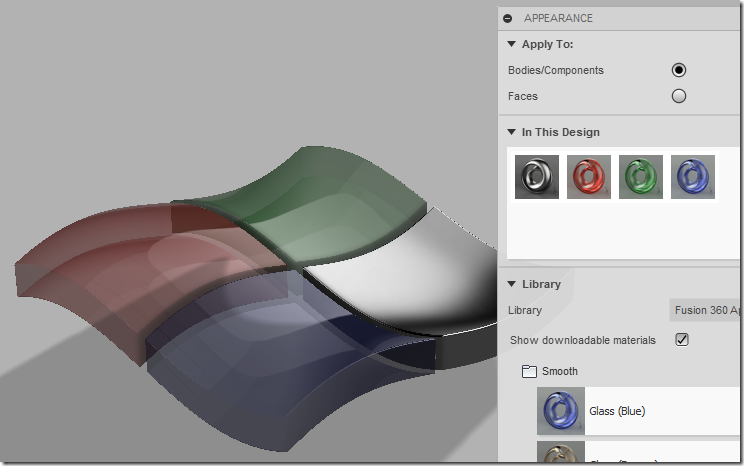 For yellow, just drag Glass (Clear) and then change the color to yellow 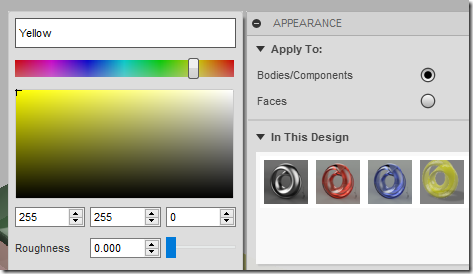 Modify each of the colors as below: 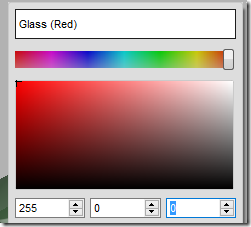 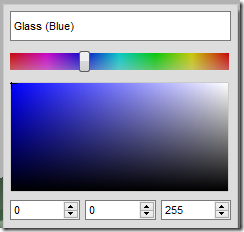 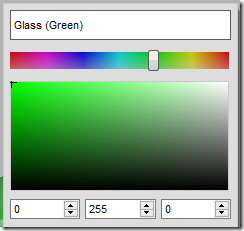 You will now have this: 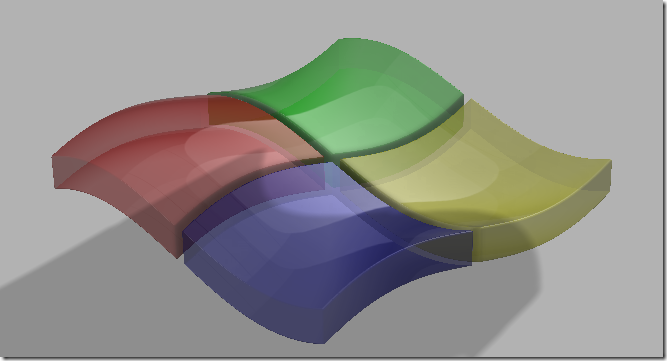 Don’t worry, it looks bad now because we haven’t rendered it yet.

Click on Enable Ray Tracing to get a preview 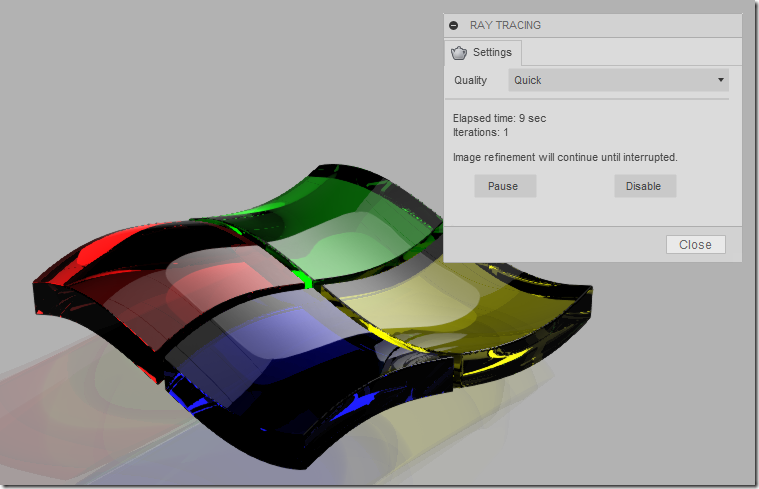 Click “Scene Settings” to adjust the type and position of the reflection.

Here are the rest of the settings

So already it looks pretty awesome 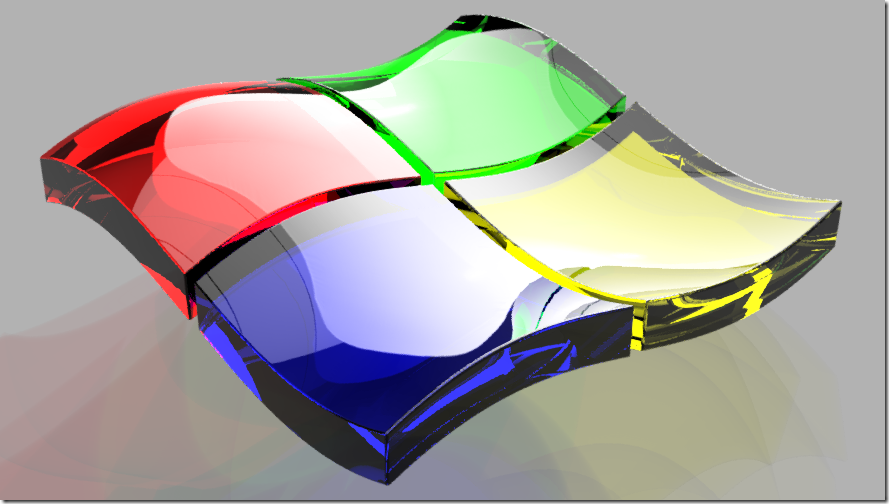 But, the magic happens on the cloud rendering.

Here are the settings I typically use when I want a final render.

You can also view your renders here: https://rendering.360.autodesk.com/mygallery.aspx 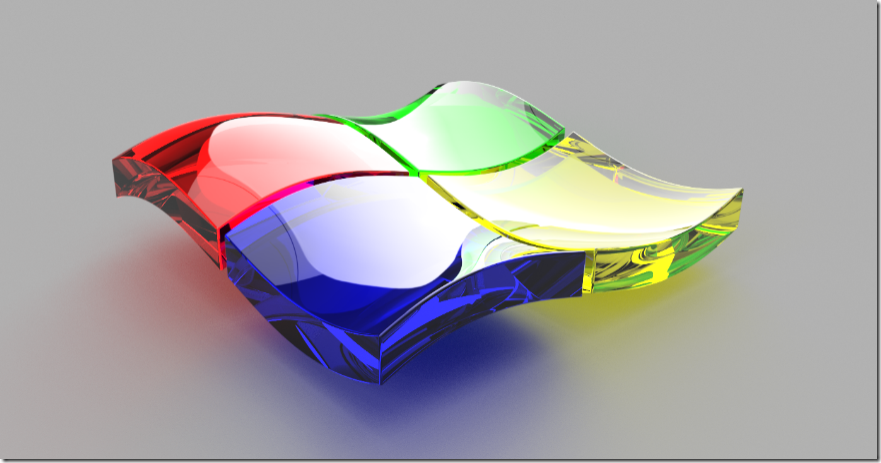 I hope you learned a little more about Fusion 360 by following along. It was a great learning experience for me.