All was good – I was ready to start printing again. But, as I went to put the nozzle back into the heater block I tightened it a little two much and snapped the nozzle into two pieces.

Here’s a picture of my broken nozzle. 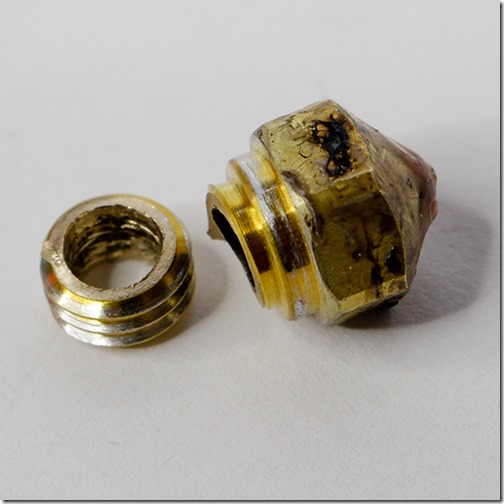 Up until this point I hadn’t really considered the uniqueness of my nozzle, but it turns out that my printer, the Dremel Idea Builder, has an MK10, M7 Thread, .4mm orifice nozzle.

It was late on Friday night. I had a ton of printing to do and a deadline to meet. Unfortunately, I didn’t have a spare nozzle on-hand.

1. I emailed the Microsoft Garage and my 3D printing friends in IoT Maker. They didn’t have an exact match

2. I called Vetco and Fry’s the next day. Fry’s doesn’t have 3D printer parts and Vetco doesn’t carry my nozzle.

3. I searched online and narrowed it down to either: Proto-Pasta.com or Micro Swiss. I ended up going with Micro Swiss because it was a few dollars cheaper and the description says they coat it with TwinClad XT a nickel composite designed for very low friction. After I ordered it I emailed Micro Swiss asking them to rush the delivery. I just got an email back from them saying they shipped it with priority. It should be here by Wednesday.

1. Don’t use too much tension when reassembling the nozzle back into the heater block.

2. Have a spare nozzle on hand, just in case you break one.

I got the Micro Swiss nozzle and it is working great. It was clogged this morning, but I think it was my fault for pausing a print for too long.