Blender is powerful and overwhelming. I installed it and tried to build some simple objects and couldn’t figure it out on my own, so I started to watch some of the videos and it slowly started to click. I was coming from the SketchUp, 123D and Tinkercad world where everything is visual and icon driven. Blender isn’t as user friendly as those options – but it is capable of so much more.

Here’s a shot of the interface. It’s overwhelming at first, but it gets better as you go through and learn what each thing does. 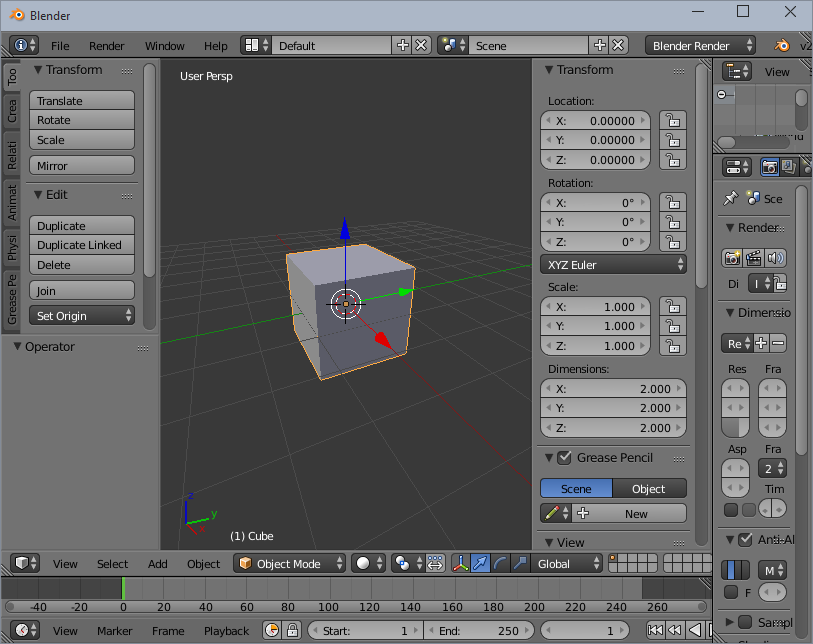 This series is specifically targeting towards 3D printing for makers, some of which don’t have a lot of experience with complex software like IDEs. Coming from a Visual Studio or Photoshop, Blender would probably be a quick ramp up, but coming from Tinkercad would take much longer.

Since Blender can do everything and anything, not just 3D modeling for 3D printing, I would say that the 3D printing training DVD or course is required. Blender is free itself, but the training is either $12/month online or $32 download. Not a huge deal financially, but something to consider. It would be a good investment since Blender looks like it will be around and active for a very long time.

There’s a good Blender intro post on Hackaday that should give you a good idea of what the initial experience is like. There are a ton of comments on that post that range from “Blender is not the right choice for mechanical drawings and CAD” to “Blender is the best tool ever, just learn it”.

Other than 3D modeling for 3D printing, I have no intention of doing anything else with 3D modeling, like animation and so on. While Blender is powerful I don’t think it’s the right choice for me or for makers because of the ramp up time. Yes, it can be done and probably fine if you already know it, but I don’t really want to invest the time it takes to learn all of it’s intricacies. I feel like a lot of the ramp up time is because it tries to do everything. I would prefer software that is specifically targeting towards 3D printing.